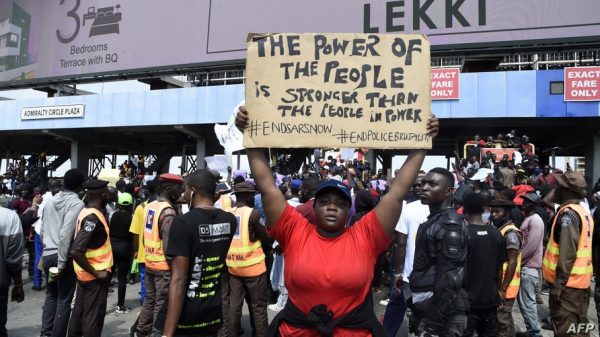 A demonstrator holds a placard to protest against abuses by the Special Anti-Robbery Squad (SARS) at the Lekki toll Plaza in Lagos, on October 12, 2020. - Nigerians protested to pressure the government to follow through on disbanding a feared police unit after authorities made the rare concession in the face of widespread anger over abuses. Around 2,000 people blocked one of the main highways in the country's biggest city Lagos, demanding officials make good on an announcement on October 11, 2020, that the federal Special Anti-Robbery Squad (SARS) was being scrapped. (Photo by PIUS UTOMI EKPEI / AFP)
Post Views: 194

Some of the #EndSARS campaigners invited by Lagos State Governor, Babajide Sanwo-Olu, to a peace walk in December, have rejected the invite.

The governor had while addressing Lagosians on Tuesday over the report of the Judicial Panel of Inquiry on #EndSARS, invited Folarin Falana (Falz), Debo Adebayo (Mr Macaroni), Dele Farotimi, Temitope Majekodunmi, Segun Awosanya (Segalink), Adedotun (Just Detoun) and Seun Kuti to walk with him.

But reacting to the governor’s overture towards fence mending, Falana, Adebayo and Kuti flatly rejected his peace offering, instead asking the governor to implement the #EndSARS report as submitted by the panel.

Falana, who tweeted via @falzthebahdguy, described the peace walk as a “joke”, insisting that justice must be served for all victims of police brutality.

Also, Adebayo, who tweeted via @mrmacaronii, said he was not ready for any walk, adding that the last “walk” he had, he was stripped naked and dehumanised.

“I humbly decline the Invitation of Mr Governor. The Government itself set up a panel. The panel has made recommendations. I believe that genuine peacemaking will begin by first implementing the recommendations of the panel. Then we can begin to trust the government.

“Finally, I’m not at war with anyone. Not with the Government, police or politicians. All we are asking is that our leaders place value on our lives as citizens and lead us with love, fairness, truth and justice, to enable all Nigerians live a better life in peace and unity,” he wrote.

For Seun Kuti, justice will have to come first before peace and he told the governor so. “I want peace after justice.

“I don’t need to walk next to the governor before there is peace in Lagos; there has been peace in Lagos before many years and nobody have to walk anywhere for it.

“If there is justice, then we can discuss peace. In fact, there will be no need to walk for peace because justice itself is the walk of peace. The governor should walk the walk he is talking about by giving us justice,” Seun responded in a Channels TV programme, Politics Today, on Tuesday.

However, Awosanya, @segalink tweeted: “@jidesanwoolu has shown leadership with this matured response and we hope the White Paper will mirror his sentiment. We all want closure, Justice and healing for our society. The experience of 20th October 2020 must never be repeated.”