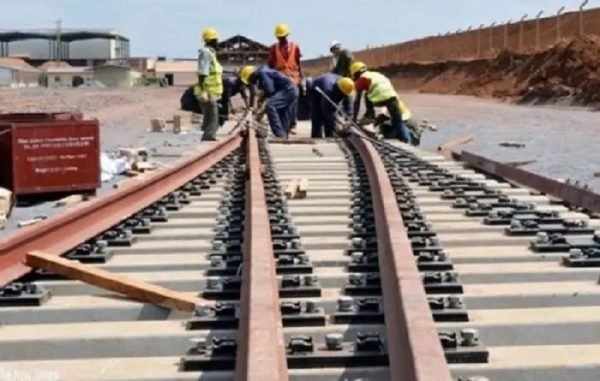 The Nasarawa State Police Command said it has arrested the Special Adviser on infrastructure to Governor Abdullahi Sule of Nasarawa and a Chinese national over the vandalism of railway tracks and slippers in Lafia and Keana local government areas of the state.

Also arrested were 66 suspected kidnappers and armed robbers, who “have been terrorising the citizen of the state and its environs”.

Parading the governor’s aide at the command headquarters on Thursday alongside the suspected kidnappers and armed robbers, Commissioner of Police, Mr. Bola Longe, said all the suspects were arrested through the command’s developed strategic anti-vandalism template.

According to the commissioner of police, Mr. Marta Thai, a Chinese national and the manager of Yong Xing Steel Company, Tunga Maje in the Federal Capital Territory, Abuja (FCT), who is the “criminal receiver”, was also apprehended.

He said that a 48-year-old man, Nathaniel Oba, who is the principal partner, Nathoba and Co, a law chamber in Benin city and legal adviser to Yong Xing Steel Company Nigeria limited offered N600,000 to bribe the investigating team of the anti-kidnapping unit to secure the release of his client, was among the suspects who were apprehended.

The command said it also arrested two police officers, a staff of the Nigerian Security and Civil Defence Corps, and a former supervisory councillor in the state.

The police boss stated that the suspects had been in the business of buying and selling railway tracks and slippers from other suspected vandals, but luck ran out on them when the police command got informed of the criminal act and mobilised for their arrest.

“It is gratifying to note that this template paid off when police operatives swooped on the vandals at their theatre of operation while vandalising and carting away railway tracks/slippers along Agyaragu Tofa in Lafia Local Government Area and Angwan Alago of Kadarko district in Keana Local Government Area.”

Speaking to journalists, the governor’s aide said that he was not aware that the items sold to him were vandalised.

According to him, “I am a businessman and I am into general property.

“I have an agent that supplies things to me and I believed in him.”

“The agent who sold the items is dead.

“He died last month in an accident along Akwanga/Nasarawa Eggon road.

“It was the first time they brought the railway tracks and slippers to me.

“After buying, I sold it for 3.6 million naira,” he stated

Buhari’s preference for a northerner as army chief unsettles military