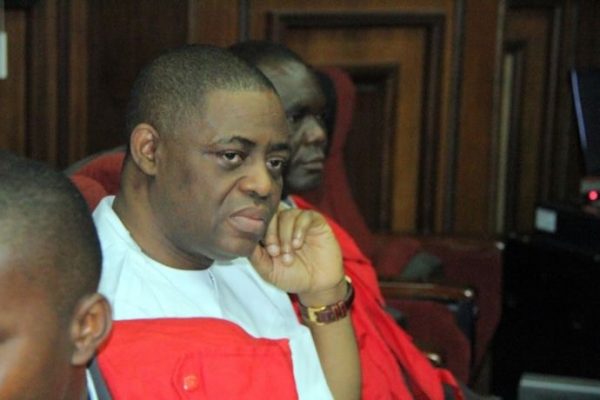 Fani-Kayode, a returnee chieftain of the All Progressives Congress (APC), was arrested at a Federal High Court in Ikoyi, Lagos, and moved to a nearby EFCC office.

The former minister, was in court in continuation of a 17-count charge of N4.6 billion money laundering against him, a former Minister of State for Finance, Nenandi Usman; Yusuf Danjuma, a former Chairman of the Association of Local Governments of Nigeria (ALGON) and a company, Jointrust Dimentions Nigeria Ltd.

He was leaving the court after the matter was adjourned till January 24, 2021, when he was approached by EFCC investigator, Mr. Shehu Shuaibu.

While Fani-Kayode was still in the corridor of the court, Shuaibu walked up to him alongside the prosecutor and after some chat, the defendant entered his vehicle and followed the EFCC operatives to their office.

RELIABLESOURCENG.COM later learnt that Fani-Kayode was in EFCC custody where he was being quizzed over the false documents.

Fani-Kayode and the other accused persons who were arraigned before Justice Mohammed Aikawa of a Federal High Court in Lagos had pleaded not guilty to the charges and were granted bail.

Trial had begun before Justice Aikawa and witnesses were still being led in evidence, until Aikawa was transferred out of the Lagos division.

The charge was subsequently assigned to a new judge, Justice Daniel Osaigor, and the defendants were scheduled for re-arraignment on October 13, 2021.

But on the said adjourned date, Fani-Kayode was absent from court and defence counsel, who appeared on his behalf on the said day, told the court that he was on admission at Kubwa General Hospital, Abuja.

He had prayed for an adjournment on that ground on behalf of second defendant but, EFCC prosecutor, Mrs Bilikisu Buhari, informed the court that the defendant was fond of adopting same tactics whenever he did not want to attend court.

After going through the court’s records, Justice Osiagor noted that it was clear that the defendant had issued similar letters five times earlier.

The court had consequently ordered the defendant to be present in court on the next date without fail.

On Tuesday, when the case was mentioned, all the defendants were present in court.

The prosecutor, Mr Rotimi Oyedepo, did not oppose the letter of first defence counsel.
Oyedepo, however, informed the court that the prosecution was glad that the court had figured out from its record that Fani-Kayode had sought repeated excuses from the court.

He told the court that the prosecution had recently discovered that all letters sent by Fani-Kayode were fake.

At this point, the court stopped the prosecutor on the grounds that it was a matter the agency ought to thrash out before the court acted on the letters to grant an adjournment.

Osiagor said that having granted an adjournment on the letters, the court had become “functus officio” – meaning that the jurisdiction of the designated authority (the court) has come to an end, having performed its function.

In response, Oyedepo told the court that the agency was currently working on the report and will do the needful.

It was after the adjournment that Fani-Kayode was arrested.