I’m not aware Peterside has been sacked - Amaechi
Advertisement 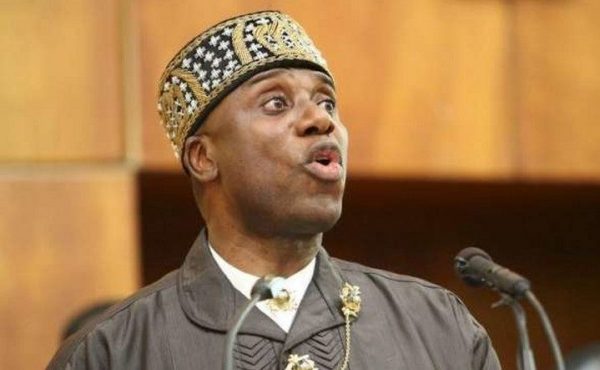 Minister of Transportation, Rotimi Amaechi, on Thursday, declared that he was not aware of the removal of the Director-General of the Nigerian Maritime Administration and Safety Agency (NIMASA), Dakuku Peterside.

The media space had been awash with report that President Muhammadu Buhari had approved the appointment of Bashir Jamoh as the new Director-General of NIMASA.

The report is yet to be denied by the presidency.

But speaking at a live television programme on Africa Independent Television (AIT) monitored in Abuja, Amaechi said he was neither aware of the new appointment or the sacking of Peterside, from NIMASA, a strategic agency under his ministry.

He argued that Peterside’s tenure had yet to expire.

RELIABLESOURCENG.COM had reported that Peterside’s tenure as NIMASA DG ends on March 10, 2020.

“Until his tenure expires, that is when you can approach Mr President either to re-appoint or replace him. By law, the President has appointment authority, while the minister has the recommendation authority.

“As the Minister of Transportation, I should know, the government does not take unilateral decisions. If he were to be sacked, I should have been intimated of his sack, but I am not aware. Although his tenure expires on Tuesday,” Amaechi declared.

When asked if the alleged sack had anything to do with the National Assembly’s probe of the agency for failing to audit NIMASA’s account for the past six years, the minister replied, “I am not aware of that.

“You said six years, he came into office in 2016 and that means he has been DG for four years. You cannot be punishing him for the offence committed by past DGs.”

Amaechi faulted reports of the removal of Peterside, describing them as speculations.

“I don’t think the news is right, I feel its mere speculation. They should wait until next Tuesday. As I said, the President has the authority to appoint whoever he wants to appoint and if he wants to extend his tenure he can do so,” he urged.

Why Nigeria may be losing the war against Boko Haram

Senate approves $22.7b loan for Buhari