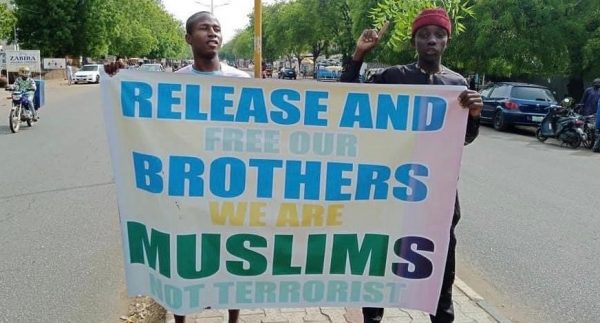 Some of the protesting Muslim youth display their banner

Governor Aminu Tambuwal on Saturday imposed a 24-hour curfew on Sokoto metropolis as Muslim youth took to the streets to protest the arrest of their colleagues, following the gruesome murder of a Christian female student, on allegation of blasphemy.

Ms Deborah Samuel, a 200-level student of Shehu Shagari College of Education, Sokoto, was on Thursday attacked by a mob of Muslim youth, beaten and stoned to death and her corpse burnt after she was accused of blaspheming Prophet Muhammad.

Deborah’s sin was a WhatsApp voice note she posted on a student group platform, urging her colleagues to stop posting “nonsense” religious messages on the group chat meant for academic activities.

The police had in a statement said two persons have been arrested in connection with the brutal killing of the former Home Economics student.

Tambuwal in a statement said: “Following the sad incident that happened at the Shehu Shagari College of Education on Thursday and sequel to the developments within (Sokoto) metropolis, this morning till afternoon, by the powers conferred on me by sections 176(2) of the Constitution of the Federal Republic of Nigeria; and section 1 and 4 of the Public Order Act; and, also Section 15 of Sokoto State Peace Preservation Law, I hereby declare, with immediate effect, a curfew within (Sokoto) metropolis of Sokoto township for the next 24 hours.

READ: Nigerians outraged over stoning, burning to death of female student in Sokoto

“I appeal to the good people of Sokoto state to kindly continue to observe law and order and calm down (on the) restiveness currently pervading in the metropolis.

“Everyone should, please, in the interest of peace go back home and observe these measures, with a view of the reestablishment of peace, law and order in the state.

“It is not in the interest of anyone for us to have a breakdown of law and order. I, therefore, appeal for restraint; and, for people to observe and respect the rule of law.”

The protesting Muslim youth were demanding the release of the two suspects arrested by the police.

Major streets such as Ahmadu Bello Way, Kano Road, where banks are located and Emir Yahaya Road, were deserted with business places and shops closed.

Attempts by the protesters to attack the Palace of the Sultan of Sokoto, His Eminence Alhaji Muhammad Sa’ad Abubakar III, were resisted by security men on the ground.

The Sokoto State Command Police Public Relations Officer, Sanusi Abubakar, confirmed the protest, assuring that the police were on top of the situation.

Many well-meaning Nigerians have condemned the murder of Deborah while some persons have defended the mob action.