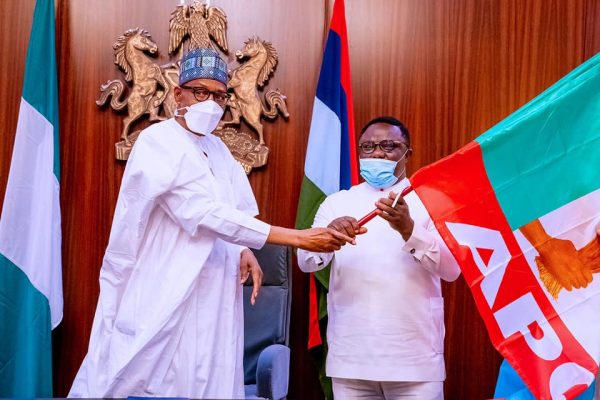 The All Progressives Congress (APC) Caretaker Committee Chairman and Governor of Yobe State, Mai Mala Buni, has announced that the party’s congresses in the states would now hold July 31.

Buni, who spoke Monday at the State House, Abuja, while presenting defecting governors, Ben Ayade of Cross River State and his Zamfara State counterpart, Bello Matawalle, formerly of the Peoples Democratic Party (PDP), to President Muhammadu Buhari, explained that the ward, local government and state congresses of the APC was shifted by one week.

The party had announced indefinite postponement of the congresses.

However, Buni said the congresses were shifted by one week, because the initial dates clashed with Sallah festivities.

Speaking while welcoming the two governors to APC, President Buhari hailed the duo for having the courage to defect to the APC from PDP.

According to him, by these defections, the two governors will now earn more respect from their people for having the courage to move to the ruling party.

The President stressed that the coming of the two governors to APC was very important to the party, adding: “To be principled and identify your objectives is a great quality that should endear us to our people.

“Your people will respect you more for having the courage to come to APC at your own time. Nobody forced you, but you believe it is the best way to serve your people. I value your decision.”

According to him: “This is one of the happiest times for us in this party. For you to have the courage to leave your constituencies speak a lot. I wish Nigerians will reflect about it.

“I congratulate you for leaving your constituencies for our great party. We lost many states at the last election, which is unusual for a ruling party. But we did it to prove that we are a tolerant group. We wanted to demonstrate that we respect individuals.

“We emphasised that we respect our people. That was why we insisted on free and fair elections. Leaders should show honesty and respect for their followers.”

President Buhari thereafter handed the flags of the party to the two Governors and raised their hands aloft.