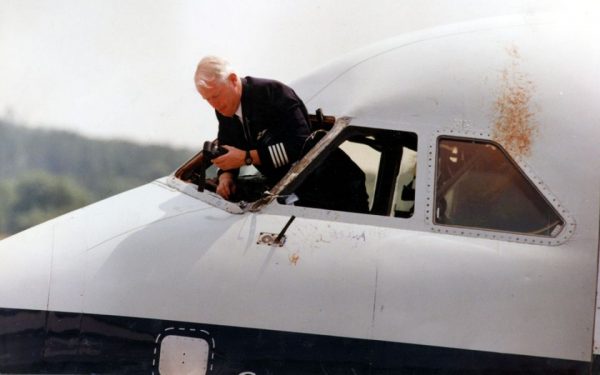 …How a BA pilot got sucked out of the cockpit window

Like all airlines, British Airways has experienced a dreadful 2020, dogged by a virus that has devoured the demand for travel, and left airports looking like post-Gold Rush ghost towns in the California hills. However, if there is one small thing that the UK’s flag-carrier can say in favour of this dark year, it is that it has not thrown up an incident quite as dramatic or unnerving as that which occurred three decades ago, in the summer of 1990.

The story of BA Flight 5390 remains one of the strangest, most disturbing and most astounding moments in the airline’s history. That it chimes with all three of these descriptions simultaneously reveals much about a perilous 22 minutes that could have led to conflagration and recrimination – but which, thanks to swift thinking, considerable heroism and survival instinct, has become a story to be recounted with a sigh and a smile.

The day began normally enough. The departure was as unexceptional as any from a British airport that Wednesday – leaving Birmingham at 8.20am; an early-bird worm-catching endeavour, bound for Malaga. The date was June 20.

On board were 87 people – six crew members, and 81 passengers. Many of them were rushing south for a welcome dose of sunshine on the Spanish shoreline, knowing the beaches would be significantly quieter that week than they would a month later, when the school year had finished.

However, if gentle relaxation was what most of those travellers had in mind, their morning would deal in quite the opposite.

The aircraft – a BAC-111 with the name County of South Glamorgan – took off smoothly. However, 13 minutes into the flight, as it passed above Didcot in Oxfordshire at about 17,300ft (5,300m), it suffered a malfunction that might have sent it spiralling to its doom.

This was nothing to do with its engines or wings – but rather, a panel of glass. The plane was continuing to climb when, with a loud bang, its left windscreen panel was pulled loose of its fittings. The effect on the aircraft was sudden – the cockpit starting to fill with condensation; decompression beginning immediately.

The latter had a direct effect on the captain, 42-year-old Tim Lancaster – who had 11,050 hours of flying time on his CV, but had never faced anything like the ordeal about to engulf him. Seated next to the now gaping hole, but with his seatbelt and his shoulder harness crucially loosened (the take-off procedures having largely been completed), he was sucked from the cockpit.

READ: SARS House of Horror: Intriguing account of a Survivor 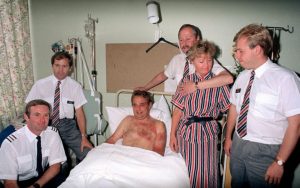 But for the prompt action of one of his colleagues, he would have been pulled entirely outside. Flight attendant Nigel Ogden had been in the cockpit just as the windscreen panel came loose. He was able to grab Lancaster’s belt as the pilot was dragged outwards, clinging on even as the captain’s head and upper torso were pinned to the exterior fuselage. The question was whether he could keep hold as the plane lurched and spasmed.

Mr Ogden would later remember those crucial seconds with commendable clarity. “I was just stepping out, with my hand on the door handle, when there was an enormous explosion, and the door was blown out of my hands,” he recalled. “I thought ‘My god, it’s a bomb’.”

It wasn’t, but the turn of events was scarcely much easier to process, and could have been just as terminal.

“I whipped around, and saw that the front windscreen had disappeared, and Tim was going out through it,” Mr Ogden explained. “He had been sucked out of his seatbelt – and all I could see were his legs. His shirt had been pulled off his back, and his body was bent upwards, doubled over around the top of the aircraft. I jumped over the control column and grabbed him around the waist – to avoid him going out completely.”

Capt Lancaster’s incapacitation was a problem for more than his own precarious existence. His semi-ejection from the cockpit had seen his knees become wedged against the controls – a small plank of assistance in the crew’s bid to prevent the captain from falling to his death, however, a significant hindrance in attempts to keep BA Flight 5390 in the air.

The rapid decompression had yanked the cockpit door from its hinges, and forced it against the console. “Tim’s legs were jammed forward, disconnecting the autopilot, and the flight door was resting on the controls,” Mr Ogden continued. “The plane was hurtling downwards at nearly 650 kilometres an hour, through some of the most congested skies in the world.”

Thankfully, unlike Capt Lancaster, the co-pilot had not got around to unclipping his safety harness – and somehow, First Officer Alastair Atchison was able to maintain his composure. Although the position of the door against the throttle was contributing to the aircraft accelerating as it plunged, the 39-year-old was able to initiate an emergency descent to an altitude where everyone on board could breathe without oxygen masks. He was also able to re-engage the autopilot and broadcast a distress call – but with the rushing of the wind through the failed windscreen, he was unable clearly to hear the instructions from air-traffic control.

Meanwhile, Mr Ogden was starting to suffer the effects of his exertions – his exhausted arm muscles weakening in their determined hold on to the captain. Two other cabin crew members were able to take over in hanging on to the pilot – but not before Mr Ogden had begun to develop frostbite. Capt Lancaster – it was assumed – was in a much worse condition. He had slipped even further from the aircraft, leading all involved to believe he was dead.

“His face was banging against the window, with blood coming out of his nose and the side of his head,” Mr Ogden added. “His arms were flailing, and seemed about six feet long. Most terrifyingly, his eyes were wide open. I’ll never forget that sight, as long as I live.”

First Officer Atchison urged his colleagues to redouble their efforts in keeping a grip on Capt Lancaster, warning that letting go would not just be the end of his life; it might cause serious damage to the plane – his body could collide with a wing or an engine. While he was giving out this advice, he was also trying to make proper contact with air-traffic control. Finally, permission to land at Southampton was confirmed. The aircraft touched down at 8.55am.

Thankfully, when the BAC-111 came to a halt in Hampshire, it did so with no loss of life. All 81 passengers disembarked via boarding steps. Mr Ogden was treated for his injuries, and would leave the plane with his right arm in a sling. Capt Lancaster was pulled back to safety with bruising, fractures and frostbite of his own – but nothing more severe.

The investigation was prompt, and damning. It was ascertained the windscreen had been installed just 27 hours before the flight – and the 90 bolts used had been either too small in diameter, or too short, to perform the job required of them. This was also a repeated mistake – the same erroneous bolts had been screwed in the previous time the windscreen had been changed.

The engineer of June 1990 had replaced them like for like, without consulting proper maintenance documents. Fractional errors; a giant catastrophe. Police would find the panel, with most of the bolts still in it, near Cholsey in Oxfordshire.

Remarkably, everyone concerned would be back at their posts relatively quickly. Capt Tim Lancaster returned to the cockpit within five months, and stayed with British Airways until 2003, before moving to easyJet for five years, ahead of his retirement in 2008. First Officer Alastair Atchison joined Jet2, but was flying with the budget airline until he turned 65 in June 2015. Nigel Ogden was awarded the Queen’s Commendation for Valuable Service in the Air, and continued with BA until leaving the industry to work for the Salvation Army.

Even County of South Glamorgan made its way back to the runway. It was already a veteran at the time of the accident – having been manufactured in 1971. It would fly in British Airways colours for another three years, before being sold to Romanian low-cost carrier Jaro International in 1993. Even then, it managed to chalk up another eight years of service, only trundling to the scrapyard in 2001 when its final employer went bankrupt.

It is unlikely it would have survived much longer. A dinosaur that had emerged from the factory in 1963, the BAC-111 was increasingly too outmoded, too clunky – and certainly too noisy – for 21st century aviation. It began to disappear from Europe’s skies as the new millennium gathered momentum, superseded on its staple short-haul routes by the Airbus A320.

It found a new home in Africa, but gave notice of its fatigue in 2002 when one of its number, toiling for Nigerian carrier EAS Airlines, crashed due to engine failure on the edge of the city of Kano, killing 71 people on board and 78 on the ground. It would be the worst disaster in the plane’s half-century-plus career. The last of its kind – which was still active for the US aerospace company Northrop Grumman – was handed its gold watch last year.

ASUU may call off strike as FG yields to demands