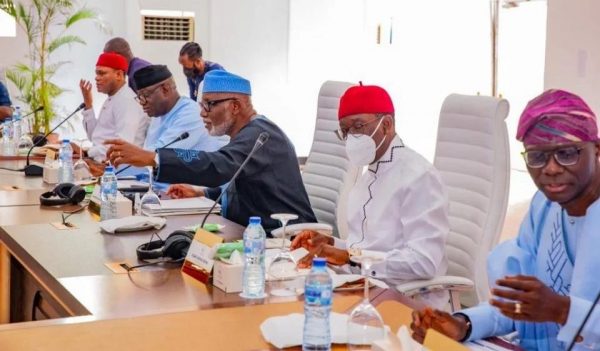 Governors of the 17 southern states of Nigeria rose from a meeting on Monday, in Lagos, rejecting the proposed allocation of at least 30 per cent of the profit generated by the proposed Nigerian National Petroleum Company Limited for the exploration of oil in the ‘frontier basins’, as identified by Section 9 of the recently passed Petroleum Industry Bill.

The bill, if signed into law by the President, Muhammadu Buhari, will set the standard for the regulation of the oil industry in Nigeria.

In a communiqué issued at the end of their meeting in Alausa, Ikeja, Lagos State, the governors commended the National Assembly for the progress made in the passage of the PIB.

The communiqué was signed by the Governor of Ondo State and Chairman, Southern Governors’ Forum, Rotimi Akeredolu, SAN.

The communiqué partly read, “The Forum rejects the proposed 3% and support the 5% share of the oil revenue to the host community as recommended by the House of Representatives;

“The forum also rejects the proposed 30% share of profit for the exploration of oil and gas in the basins.

“The forum rejects the ownership structure of the proposed Nigeria National Petroleum Company Limited. The Forum disagrees that the company be vested in the Federal Ministry of Finance but should be held in trust by Nigeria Sovereign Investment Authority since all tiers of Government have stakes in that vehicle.”

The recently passed PIB has been heavily criticised by stakeholders in Southern Nigeria with the Pan-Niger Delta Forum describing its provisions as “unjust, satanic and provocative”.