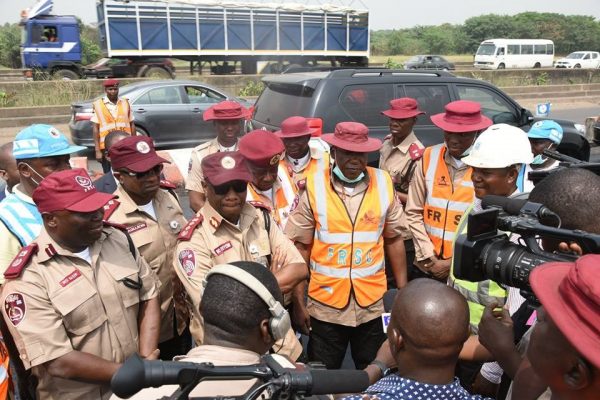 The Board of the Federal Road Safety Commission (FRSC) on Friday approved the dismissal eight officers of the commission from service.

Also, 10 officers had their appointments terminated while five others suffered reduction of ranks. In addition, another set of five officers were sanctioned with loss of seniority.

The Corps Public Education Officer (CPEO), ACM Bisi Kazeem, who announced this in a statement issued in Abuja, said the 28 erring officers of the Corps were punished in accordance with the provisions of the commission’s regulation on discipline.

Kazeem said that the action was part of the organised effort to rid the FRSC of undisciplined and corrupt elements.

He said that the officers had allegedly been found culpable for offences ranging from desertion, forgery, number plate racketeering, bribery, scandalous behaviour, drivers’ license racketeering and patrol misconduct among others.

He also said that the approval, which reaffirmed the Corps’ resolve to align with the anti-corruption policy of the President Muhammadu Buhari led administration, was granted during the meeting of the Board on Friday, September 4.

“Since the inception of the leadership of Dr Boboye Oyeyemi as the Corps Marshal, FRSC has entrenched discipline among its personnel and continually clamp down on corrupt elements.

“While a reasonable number of staff have received different punishments for misconducts, many others have equally been commended and appreciated for disciplined and exemplary conducts.’’

The FRSC Board Chairman, Mr Bukhari Bello re-emphasised the need for personnel to desist from any act of indiscipline.

Bello said that the disciplinary actions were to serve as deterrent to others who might form the habit of contravening established regulations and tarnishing the good image of the corps.

Similarly, the Corps Marshal, FRSC, Oyeyemi restated that his administration would continue to operate on the tripod of consultation, reward and punishment.

He called on staff to internalise the ideals of the founding fathers, whose drive and commitment were geared toward saving lives.

Meanwhile, the Lagos State Sector Commander of the Corps, Olusegun Ogungbemide, has said the command made 368 arrests over trucks with unlatched containers in the last two weeks.

Ogungbemide told the News Agency of Nigeria on Friday during his visit to the Badagry Unit of FRSC.

He said that the command had set up three different enforcement interventions to curb the menace of unlatched container truckers on the road.

“Operation Scorpion was set up to check the menace of the unlatched container trucks that are falling in Lagos metropolis.

“Fifty of them were presented before the Magistrate during in mobile court.

“Because we realised that the falling trucks were happening within the metropolis, we started with Scorpion 111, and this will end tomorrow.

“The signal is already sent that it is no longer business as usual,” he said.

The sector commander commended sister security agencies for working together with the Badagry Unit of the command to ensure sanity on the highways.