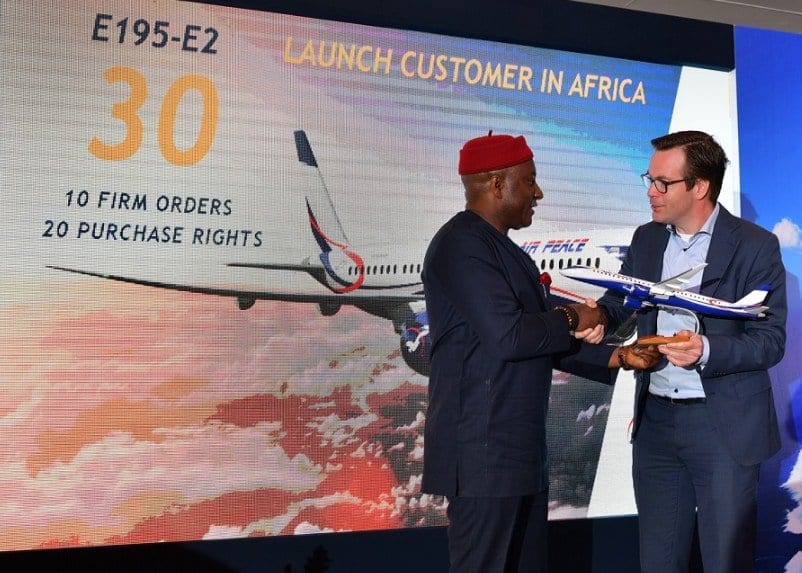 Different conspiracies have been read into the US Department of Justice indictment of the Chairman and CEO of Air Peace Airline, Allen Ifechukwu Onyema, for alleged bank fraud and money laundering.

Of all the theories, the uncertainty surrounding the fate of the agreement with The Boeing Company to purchase 10 Boeing 737 Max 800 aircraft by Air Peace appears to be gaining more currency.

It would be recalled that following multiple fatal crashes involving the Boeing 737 Max 800 aircraft, operated by the Indonesian Lion Air and Ethiopian Airlines, within a space of four months between October 2018 and February 2019, aviation authorities across the world suspended further use of the aircraft model, pending investigations.

Close to one year after the suspension of the Boeing 737 Max and no end in sight to the lifting of the ban, airlines desirous of getting ahead in their business are beginning to look for alternative aircraft to shore up their depleted fleet.

Even though Air Peace, which is today Nigeria’s biggest carrier, has not expressed a desire to cancel the order it placed for 10 brand new Boeing 737 Max 800, it has, however, recently firmed up an agreement to purchase 30 of the Brazilian-made Embraer E195-E2s to strengthen its fleet.

According to report, if all goes according to plan, Air Peace will be the first airline to operate the brand new E2 in Africa. In fact, the airline’s firm order now stands at 13, with 17 purchase rights for the same model. Reports show that the first delivery is scheduled for second quarter 2020.

Excited Air Peace boss, Onyema said of the Embraer order at the Dubai Air Show, November 17: “The E195-E2 is the perfect aircraft to expand our operations in Africa and this new order is a further confirmation of our ‘no-city-left-behind initiative which we shall continue to execute. We are receiving impressive data about the aircraft’s economics, now that is in revenue service, and this was a driver to place this new firm order with Embraer.

“We look forward to receiving our first aircraft, which will enhance connectivity in Nigeria and the African region, while feeding long-haul flights from our Lagos hub.”

So, it was alarming that barely five days after the aviation industry in Nigeria celebrated the Air Peace smooth touch down from the Dubai air show, that the US Attorney’s Office Northern District of Georgia, slammed Onyema, who has become Nigeria’s symbol of patriotism, with an indicting allegation of $20 million bank fraud and money laundering.

Criticisms of the US charge against Onyema have since dominated the various media channels, especially online, with contributors expressing varying and concurrence views. But the theory around the Air Peace-Boeing-Embraer deal seems to stand out.

“I only want to query if there are any economic undertones to these indictments, coming just a few days after Air Peace announced an order for new aircrafts from a non-American manufacturer running into a few billion USD,” started a male contributor on a WhatsApp group chat.

“Indeed, when I picked up the story about the aircraft order, I told myself that Boeing is not going to be happy about it. Knowing that Air Peace had traditionally used Boeing jets for its local and regional business and I suppose that because of the 737 max issues which have lingered, Air peace proactively might have decided to switch to Bombardier (Embraer) which is one of the biggest competitors to Boeing for aircrafts in that segment. Air peace announced an order for several Bombardier (Embraer) jets recently that could be worth a whopping $2.2b USD, over the next few years and now American authorities announce these indictments laced with such heavy innuendos. I wonder if these indictments would have seen the light of the day if these potential orders are being handled by Boeing,” he analysed.

Still on the angle of Boeing conspiracy, another contributor weighed in: “He (Onyema) had previously ordered for 10 new 737 Max planes from Boeing but cancelled after the crash of the 737 Max planes. He replaced the order with 10 new E-190 from Embraer (Brazilian Manufacturer). So, they are not happy with him. They wanted him to go ahead with the deal. The same way they came after the CEO of Huawei and his family members.”

Several other intriguing connotations have been read into the Onyema travail, yet some have chosen to be circumspect.

A financial expert who spoke to RELIABLESOURCENG.COM on condition of anonymity called for caution in analysing the US indictment.

“It is a bit too early. Recall that this is an allegation and until he (Onyema) is convicted by a court of competent jurisdiction, he remains innocent.

“My only worry is that the report was silent on the sources of the funds which he allegedly laundered. There’s no mention of proceeds of crime and laundry can’t take place if the funds were not ab initio dirty.

“All said and done, he will have his date in court and will be able to defend himself,” he responded to us.

The Air Peace boss has since denied the allegations leveled against him by the US Attorney Office, saying the allegations are false and at variance with his character as a person and as a business man whose only aim has been to build Nigeria and improve well-being.

“I never laundered money in my life, neither have I committed bank fraud anywhere in the world. Every Kobo I transferred to the US for aircraft purchase went through the Central Bank of Nigeria LC regime and all were used for the same purpose. The American companies that received the funds are still in business. I never took a penny from any US bank or Nigerian bank. I am willing to defend my innocence in the US courts,” he said in a statement.