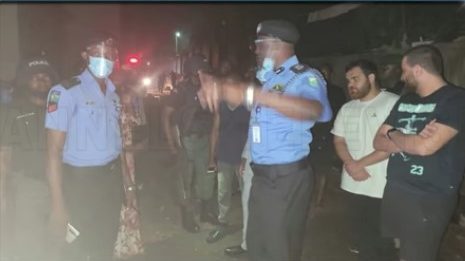 The Police in Lagos has confirmed that five people have so far died from the tragic accident on Mobolaji Bank-Anthony Way, Ikeja, Lagos State, where a liquified petroleum gas (LPG) tanker exploded and ignited a huge fire in the nearby OPIC Plaza, late Thursday night.

Spokesman of the Lagos Police Command, CSP Muyiwa Adejobi, who spoke with RELIABLESOURCENG.COM Friday afternoon said three corpses were evacuated from the premises of the OPIC Plaza earlier in the morning while 13 persons were rushed to the nearby Ikeja General Hospital.

Adejobi said that two other persons out of the injured 13 have reportedly died, bringing the total number of dead to five and leaving 11 persons battling for their lives in the hospital.

No less than 25 vehicles were burnt inside the premises of the OPIC Plaza, as the content of the tanker flowed into the large expanse of the plaza parking lot, setting ablaze the vehicles and parts of the building.

“It’s a very unfortunate incident. Security agencies, fire fighters and responders were able to contain the fire from going beyond the premises of the plaza. It would have been a bigger disaster; you know on one side of the plaza is a petrol station and on the other you have Sheraton Hotel.

“Even though the explosion happened on the road, the tanker emptied its content into the OPIC Plaza.

“We have now cleared the road of the debris of the burnt tanker and traffic is flowing normally. The plaza has been cordoned, especially to ward off hoodlums who might want to take advantage of the incident to loot, while we carry out our investigation,” Adejobi told us.

He added that the Lagos State Commissioner of Police, CP Hakeem Odumosu, had visited the scene of incident and commended security agencies and all the other persons that contributed to containing the fire.

Adejobi said the CP had ordered the arrest of the tanker driver and the owner of the tanker for interrogation. This is even as the driver was said to be on the run.

“Unfortunately, when we got there this morning, we saw three dead – one Mr Balogun who was the manager of the Chinese restaurant. He was recovered with two other personnel of the restaurant.”

The NEMA spokesman noted that the victims seemed to have made an attempt to escape from the building when the incident occurred.

He explained that this possibly led to their death, while the boy said to be missing since Thursday night had yet to be found.

The explosion, said to have been caused by a leakage while the LPG tanker was in motion, threw the environment into panic as a result of the huge fire that ensued.

This also left some people wounded with four of them taken to the Trauma and Burns Centre at the General Hospital, Gbagada.

Farinloye noted that the Commissioner of Police, Hakeem Odumosu, led a team of policemen to the scene on Friday in a bid to restore normalcy in the area.

I remain indebted to Nigerians – Buhari